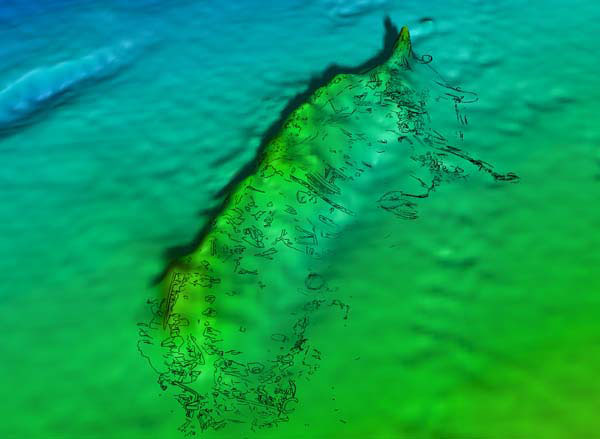 In this illustration, a drawing of the Viosca Knoll Wreck site is “draped” over the multibeam bathymetry (water depth) image. Multibeam bathymetry provides a three-dimensional perspective of the seafloor based on thousands of bathymetry soundings. Image courtesy of C & C Technologies, Inc. 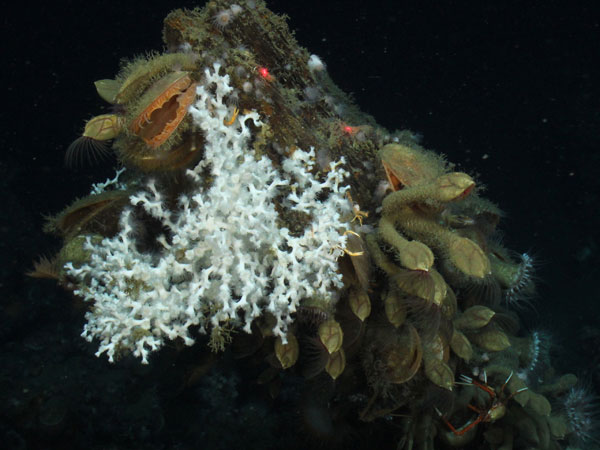 The Viosca Knoll wreck was discovered during a 2003 deep-tow survey for Mariner Energy’s proposed pipeline route in the Viosca Knoll leasing area. Side scan sonar imagery depicted a wooden-hulled vessel measuring approximately 148 ft. (45 m) in length by 33 ft. (10 m) in beam. In 2004, C&C Technologies performed an AUV survey to collect high resolution multibeam bathymetry and additional side scan sonar data. Archaeologists identified several drag scars across the seafloor near the wreck, likely caused by anchor chain and cable from a nearby oil and gas platform. Archaeologists planned to investigate the site using an ROV during the 2004 Deep Wrecks project but weather conditions intervened.

A 2006 ROV investigation  performed by C&C Technologies mapped the wreck and assessed its eligibility for listing on the National Register of Historic Places. Over the course of 6 hours, archaeologists completed a reconnaissance survey to learn about the site and acquire information ranging from the details of its construction to the artifacts it contained. Biologists noted what fauna were present at the wreck site, including several colonies of Lophelia coral. A photomosaic stitched together from the still photos allowed archaeologists to view the layout of the vessel and its associated cultural materials. The vessel is sheathed in copper and lies mostly intact with some standing rigging and other debris strewn around the outside of the hull. Damage to the fragile wooden hull was observed on the starboard side. A 12- to 14-inch wide gash indicates that an anchor cable corresponding to a nearby anchor drag scar sliced through the hull at one time. Artifacts observed and mapped by the archaeologists included a stove, lantern, rigging, earthenware ceramics, and other unidentified materials. Based on this investigation, archaeologists surmised that the wreck dates to the 19th century.

Archaeologists returned to the wreck in 2009 during the Lophelia II study, “Exploration and Research of Northern Gulf of Mexico Deepwater Natural and Artificial Hard-Bottom Habitats with Emphasis on Coral Communities: Reefs, Rigs, and Wrecks.” This time, archaeologists documented the site with an ROV over the course of 10 hours and compiled another photomosaic. Similar to the tasks performed at other shipwrecks during the Lophelia II study, scientists collected sediment cores, biological samples, and deployed short-term and long-term microbiological experiments.  Artifacts collected for conservation and analysis included a ceramic water filter and a sample of copper sheathing. The water filter was later identified as a style and design dating to the late 19th century indicating that the ship sank sometime thereabouts.