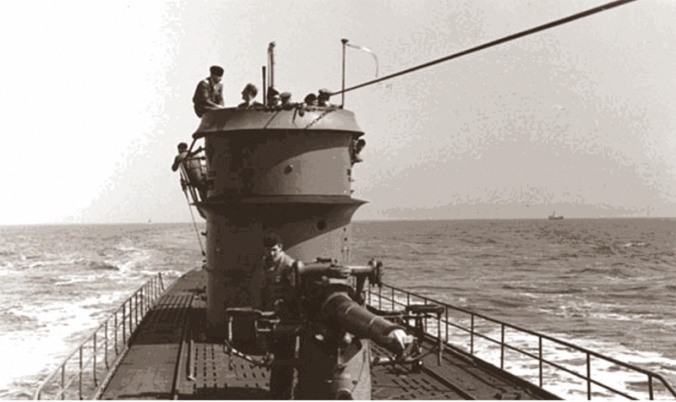 U-166 was a Type IXC German U-boat dispatched to the Gulf of Mexico in the summer of 1942 to attack Allied ships and disrupt the transportation of goods and materials out of American ports. Hitler’s U-boat campaign sent 24 U-boats to the Gulf, ultimately sinking 56 merchant ships and damaging many others. The 252-foot by 22-foot, steel plated, double-hulled U-166 carried 22 torpedoes, a 105-millimeter deck gun mounted forward of the conning tower, a 20-millimeter machine gun mounted on the wintergarten (lowered platform aft of the bridge), and a 37-millimeter anti-aircraft gun mounted on the aft deck.  She carried a complement of 58, including officers and crewmen. In June 1942, U-166 departed on her first war cruise with the intent of attacking Allied shipping and laying mines near American ports in the Gulf. After sinking the schooner Carmen, the freighter Oneida, and the fishing trawler Gertrude, U-166 entered the Gulf of Mexico and headed toward the mouth of the Mississippi River. In mid-July, the German sub laid mines off the Southwest Pass and waited for an unsuspecting ship to pass by. U-166’s final victim was the passenger freighter, Robert E. Lee, carrying 131 crewmembers, 6 merchant marine officers, and 270 passengers. Though traveling with the armed American patrol craft, PC-566, Robert E. Lee was unable to escape the U-boat’s attack. On July 30, 1942, approximately 45 nautical miles southeast of the Southwest Pass, U-166 fired a single torpedo into Robert E. Lee’s starboard side. Though most of the crew and passengers made it to the lifeboats and life rafts, 10 crewmen and 15 passengers died. During the chaos of the freighter’s sinking, PC-566 observed U-166‘s periscope and then depth charged the area where the sub was believed to have been.  U-166 and her crew were never heard from again.

For nearly 60 years, U-166 was believed to have been sunk by a U.S. Coast Guard aircraft elsewhere in the Gulf. The remains of the sub and another nearby shipwreck were discovered in 1986 in the Mississippi Canyon area during an oil and gas deep tow survey for Shell Offshore, Inc. but the sub was misidentified as possibly the remains of the freighter Alcoa Puritan, another World War II casualty lost in the same area as Robert E. Lee. A 2001 AUV survey by C&C Technologies determined that the vessel lying in two pieces was too small to be the remains of Alcoa Puritan but could possibly be U-166.  Later in 2001, an ROV site investigation sponsored by BP and Shell determined that the wreck was indeed U-166. Archaeological analysis also confirmed that the sub had been destroyed by PC-566’s depth charges. She had broken apart and left a sizeable debris field between the bow and stern. The wreckage of U-166 lies less than one mile from Robert E. Lee.

Since the 2001 ROV investigation, U-166 has been revisited several times. A five-day archaeological investigation in conjunction with NOAA’s Office of Exploration, Droycon Bioconcepts, and the PAST Foundation conducted detailed mapping of the site in 2003. In addition to the archaeological investigation, microbiological tasks included the deployment of short-term and long-term experiments to study the bacterial activity and corrosion processes occurring on the wreck. Archaeologists and microbiologists returned to U-166 in 2004 during the Deep Wrecks project to continue their analyses. More information about this project can be found in the Deep Wrecks report at:http://www.data.boem.gov/PI/PDFImages/ESPIS/4/4239.pdf.

In 2010, U-166 was briefly revisited during the fourth and final year of the Lophelia II study , “Exploration and Research of Northern Gulf of Mexico Deepwater Natural and Artificial Hard-Bottom Habitats with Emphasis on Coral Communities: Reefs, Rigs, and Wrecks.” Archaeologists collected additional ROV video, still photos, core samples, and biological samples and re-examined the test platforms that had been deployed on site in 2003. More information about the Lophelia II study can be found in the study’s interim report. The final report will be published later in 2014.