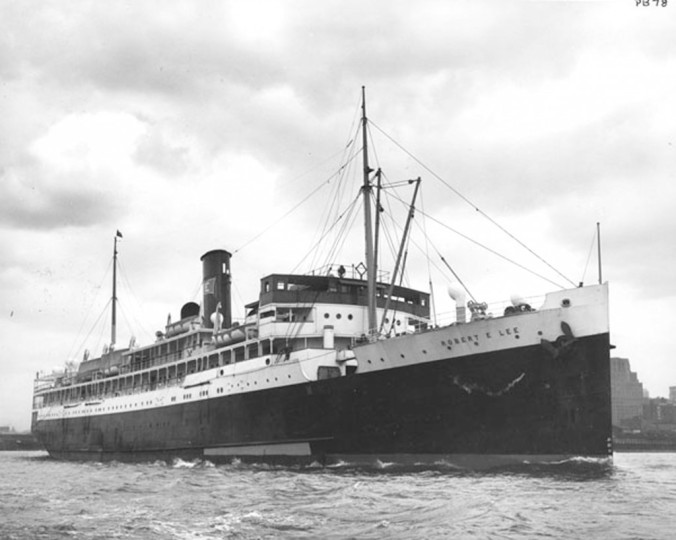 Robert E. Lee was a passenger and freight steamer built in 1925 and owned by the Eastern Steamship Lines, Inc. in Boston, Massachusetts. With a keel length of 373 ft. (113.8 m) and beam of nearly 54 ft. (16.4 m), the freighter was constructed primarily to carry passengers between Virginia and New York. After the U.S. entered World War II, the ship was chartered by the Alcoa Steamship Company in February 1942 to transport cargo and personnel from New York to ports further south and in the Caribbean. In March 1942, Robert E. Lee was contracted to the War Shipping Administration (WSA) and was soon after degaussed and armed with a stern mounted gun in preparation for her WSA duties as a freight carrier. In July 1942, Robert E. Lee left New Orleans bound for Trinidad where her cargo was unloaded and she took on around 270 passengers. On her return trip to New Orleans, Robert E. Lee initially traveled with a convoy across the Caribbean but eventually broke off to join up with U.S. Navy Patrol Craft (PC) 566 who would serve as an escort for the final stretch of the voyage. On the afternoon of July 30, the two vessels were less than 75 km from the Mississippi River entrance when the German U-boat, U-166, attacked.

A single torpedo struck Robert E. Lee’s starboard side and the freighter began to sink. After the attack, lifeboats and rafts were launched to allow the passengers and crew to abandon ship while PC-566 chased after the U-boat to drop depth charges. Out of 270 passengers, 131 general crew, and 6 merchant marines, 15 passengers and 10 crewmembers lost their lives.

In 1986, a deep-tow hazard survey performed by John E. Chance and Associates for Shell Offshore, Inc. discovered the shipwreck in the Mississippi Canyon leasing area near another possible shipwreck. Lying in more than 4,700 feet of water, the shipwrecks were initially believed to be the remains of Robert E. Lee and Alcoa Puritan, another World War II U-boat casualty. In 2001, additional AUV surveys by C&C Technologies followed by an ROV investigation determined that the second shipwreck was actually the remains of U-166, broken into two pieces. In 2003, C&C Technologies conducted a field project under a grant from NOAA’s Office of Ocean Exploration to return to U-166 for a more detailed investigation. In addition, some time was spent examining Robert E. Lee and the surrounding debris field where additional debris including lifeboats was identified.

During the 2004 Deep Wrecks project, a study partly funded by BOEM (then MMS), Robert E. Lee was one of several shipwrecks investigated by archaeologists using a Remotely Operated Vehicle (ROV). The purpose of the study was to examine the artificial reef effect of shipwrecks and learn more about shipwreck degradation and metal corrosion processes. ROV video footage and rusticle, biological, and sediment samples were collected. Several species of corals, invertebrates, crustaceans, and other fauna were observed on and near the wreck. Biological experiments and bio-battery coupons were placed on site to measure microbial concretion and biofilm formation and the electrical potentials (voltages) of in situ metals. The study found that Robert E. Lee “supported a very diverse group of organisms with a very dense number of sea anemones. Sea anemones appeared to dominate parts of the ship and acted as limiters to the amount of concretions and rusticles observed. However, inside the ship veritable “forests” of rusticles could be seen (through open doors, windows, port holes and torn walls) meaning that in these cases deterioration will probably be from the inside out” (Church et al 2007:206 -207).